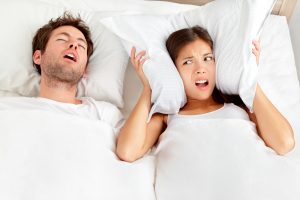 For many, snoring by one’s partner can be one of the most aggravating issues in a partnership. It can lead to lost sleep, which in turn leads to irritation and even conflict.

As one who has had a snoring problem all my life, I have been sympathetic to my wife over the past 30+ years. I have tried most of the so-called remedies, but found that none really work. I even fell to one of the scams in this industry—a chin strap that supposedly prevents you from snoring. Of course, I was very sceptical, but desperation can lead to bad decisions. However, they had a ‘money back guarantee’, so I thought what the hell and purchased it. I recall that it was somewhere around US$100 for two chin straps that would cost less than $5 if made in Mexico or the Philippines. However, if it worked, it would be worth it. Of course, it didn’t work, so I applied for the refund. This is where the scam came into play. The ad said ‘money back guarantee’. It didn’t say 100% money back guarantee. They said I had to return the two units and there would be a US$25 per unit ‘environmental disposal fee’. I realized then that the units didn’t have to work because they could still get $25 for something that would cost them less than $5. I wrote back and said that one was still in its original package and would not be subjected to the disposal fee. They wrote back saying it still had to be disposed of environmentally as they had no control of where the product had been once it left the factory. I further wrote them and asked if they would accept a video of me torching the damned things, but to no avail. I thought about going to a consumer protection association, but like most other people, I wasn’t up to wasting that amount of time for $50.

But then I did eventually cure my snoring problem, and here is my story.

When we bought our condo in Florida, we had to buy everything for it; furniture, linens, cutlery, etc. Of course, this meant buying a new bed. I had long considered a motion bed because there were claims that it helped reduce or eliminate snoring. However, I wasn’t about to pay the money for one and find out it didn’t work. When considering the other benefits of the motion bed, we decided to buy one and guess what? It solved my snoring issue by slightly elevating the head. I found it was not an issue sleeping that way either. Hallelujah!

When we got back to our home in Ottawa, we only had the regular bed, so I bought a couple of firm pillows and stacked them to elevate my head. Well, it worked! I have two pillows under my head and one under my shoulders. The odd time, my wife says I snore, but it is usually when my head falls off the pillows.

Obviously, this probably won’t work for everyone…and I don’t expect you to go out and buy an expensive motion bed. But for the price of a couple of pillows, I think it is worth a try. I would be interested in your results.

You can also use a firm foam wedge to elevate your head.