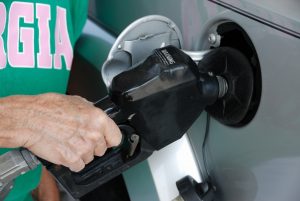 gas prices steadily increase, so we should be wiser with respect to what we put in our tank. There is a choice at the pumps of Regular (87 Octane), Mid-Range (89 Octane) and High-Test (91 Octane). Some stations even provide higher Octane blends.

First of all, why do the fuel manufacturers put in Octane? To understand this, we must understand how the four-stroke internal combustion engine works.

Skip the following technical description if you wish and go to the next paragraph.

Fuel-air mixture is induced into the combustion chamber on the piston’s down stroke. On the up stroke, it compresses the mixture and the spark plug ignites it. The detonation of the mixture causes the gases to expand and drive the piston downwards. Pretty simple, eh? Well, not so simple. The problem is that as the engine turns faster, the spark plug must ignite the fuel-air mixture before it reaches TDC (Top Dead Centre). This is called advancing the ignition and on early vehicles, this was done manually. Later, engines used vacuum to turn the distributor cap to advance the ignition and today, it is all done electronically. The reason it has to be advanced is because it does take a finite time for the gases to ignite and expand, so it is ignited just before the piston reaches TDC so that the maximum energy can be used to power the piston downwards. However, when the gases are compressed they heat up and in high-compression engines, the mixture can ignite before the spark has a chance to do so. This is what we call pre-ignition (sometimes referred to as pinging or dieseling) and is the reason the octane is added…to stop pre-ignition as it can harm the engine and rob you of power.

So, we get back to the question of whether you should be using high-test gas in your car or truck. (For the purpose of this article, I am excluding high-performance engines, even though for the most part, they will run quite well on regular gasoline). Your engine has a relatively high compression ratio and the manufacturer recommends using an octane level higher than the basic 87 (89 or 91). I place ‘recommends’ in italics because it doesn’t mean that you have to use it. Here’s why:

Most modern engines now have knock sensors so that if there is any pre-ignition detected, the timing will be automatically retarded to compensate. What this does is reduce power output and engine efficiency slightly, but only while the engine is being loaded. As soon as the load is reduced, the timing will revert to that set for optimal power and efficiency.

Why then do the manufactures recommend higher octane fuel? From a manufacturers point of view, the engine is designed to provide a certain level of performance and those performance figures are often listed in the vehicle’s manual. To do their testing, they put the car on a track and run it at high speeds with constant flat-out acceleration. In order for you to achieve the manufacturer’s performance figures, you must use high-test gas, but only if you intend to drive it in the same fashion as they did on the track. The reason why I excluded high-performance engines is because most buyers of high-performance cars will want to extract every ounce of power when they need to. If you are not in this category, are not pedal-to-the-metal constantly, nor do you travel at excessive speeds (I mean well above the highest posted speed limits), then you will not derive any real benefit from using high-test gas. So, save your money.

There are very few cars on the market that need high-test gas and most of them we would not be able to afford anyway. Even if you have one of the so-called performance cars (BMW, Mercedes, Porsche, Audi, Lexus IS, Jaguar, Acura, Infinity) these cars will run perfectly well on regular gas as long as you are driving them as they should be driven on public roads. If you take it to the track, go ahead and fill the tank with high-test gas…and have a blast.

I have had BMWs for many years and never used high-test gas because I do not drive them in a way to warrant it. I did own a Ferrari one time and always used high-octane gas because when I did use it I was often pedal-to-the-metal with it…that’s what the car was meant to do. I also used to own a Porsche Boxster S with manual shift that I filled with 91 Octane, even though I didn’t really drive it that hard. However, I made a conscious decision to pay the extra money so that when I was looking to wring out maximum performance, I could.

DISCLAIMER: While the above represents the views and opinions of the writer, it is intended to provide information by which you can make an informed decision about what type of gas to put in your vehicle. Not adhering to the manufacturers recommendations is done so at your own risk.